What Do You Mean This is No Longer Baby Weight?

So, I woke up this morning and barely opened my eyes before I just wanted to pull the covers over my head and go back to sleep.  All of a sudden the feature that I most loved about my bedroom, became the one I hated the most; the sun.  I should have listened to my husband and bought those blackout curtains he suggested for days just like this.  Too late.  I was up, and the crankiness had already manifested.

I knew instantly what time it was without even looking at my phone or the beaming alarm clock that I swear can be seen from space.  It was 7:15 am; the time that my dog begins his routine of whimpering that progressively grows into a loud, ear-splitting bark begging me to take him out.

I quietly slipped into the bathroom and slowly changed into my work out gear.  I then begrudgingly made my way to the kitchen to feed the dog and then let him out for a walk.  Then I sat and debated with myself.  What if I just skipped today?  What if I eat this muffin for breakfast?  It should be ok, right?

For most women having a baby changes the dynamic of their bodies.  It is the rare few whose bodies snap back to their pre-pregnancy selves within days of giving birth.  I remember in grad school there was a pregnant girl in one of my classes.  First of all, she didn’t show until she was in her eighth month and for the most part, she looked like me after I’d eaten a very large burrito.  That is to say, she barely looked pregnant at all.  Then one day, I remember people discussing that she had given birth that day.  The following week, to everyone’s surprise, she showed up to class late and had the nerve to skip into class wearing a cutoff shirt, of all things, with a flat belly.  All I could do was mouth to myself, “Bitch!”

Not all of us were that lucky.  I was a svelte 125 lbs before I got pregnant.  I worked out every day, in fact, I was fanatical.  My work out schedule was strictly regimented and no one, I mean no one, could detract me from it.  Plus I deprived myself of everything that could possibly add an ounce of fat on me.  No butter, carbs, fried foods, junk food or soda. I was serious, and my body definitely showed it.

Then I became pregnant, and for some reason, despite my doctor’s protests,  I rationalized that I was literally eating for two.  So, I let the floodgates open and ate anything and everything that I had deprived myself of for so many years.  Oh! And my husband didn’t help at all.  He was obsessed with the notion that a fat baby was a healthy baby and so he completely encouraged me to eat anything and everything I craved, from Burger King Whoppers to meatball subs to pizza.  Lots and lots of pizza. Nine months of constant and, I must say, happy eating led to my small frame ballooning up to 247 lbs by the time I gave birth.  Yes, I gained 122 lbs during my pregnancy because, of course despite the eating, I did absolutely no exercise.  My mother begged me to at least walk.   I refused. I was convinced that once I gave birth all of the weight I gained would fall out with the baby.

After giving birth, I found that when I came home from the hospital, I was still 230 lbs.  How could this be?  Surely, the baby, placenta and amnio fluid should have weighed 122 lbs.  Right?  Wrong.  Reality set in.  It wasn’t the baby.  I.  Was.  Fat.

Even six months later I was still 200 lbs., but, by this point, I had given up on  my former self.  When looking at old skinny pictures, I had come to the resolution that the new me had eaten and digested the old me, and she was never coming back.  Plus I had failed to close the now wide open floodgates.  I continued to eat all the foods that I had once deprived myself of and that I now loved and couldn’t get enough of.  I made excuses to eat.  If my son didn’t finish his plate of food, surely I would have to finish it.  After all, I couldn’t let food go to waste.

It becomes easy to hide behind weight.  Make excuses for it.  It’s especially easy when you have a supportive spouse who tells you that you’re beautiful no matter what and says things like, “Stop it! You’re not that big!”  That’s when you bury the scale in the closet, avoid the mirror and begin to ignore the fact that you now have to shop in a completely different section of the department store.  You get comfortable.  I got comfortable.

But if I ever forgot my weight, I definitely had my family to remind me.  I avoided family gatherings.  West Indians are ruthless, with tongues as sharp as razor blades.  One look at me and the first words were, “Lawd! Yuh get fat!” or “Yuh luk like yuh really been eatin’!”  It’s funny how you can avoid a mirror all you want, but family will hold it up and force you to look in it.

Just how long was I going to use my “baby” as an excuse for the weight?  It’s no longer “baby weight” when the “baby” is almost a grown man.  I think that excuse had passed its limit.  At some point, I had to take responsibility for me. 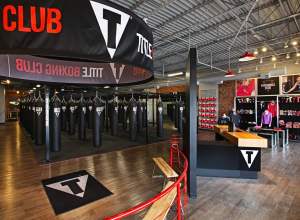 On January 26, 2018, I walked into a Title Boxing Gym and changed my life.  One hour; just me against a punching bag.  For the first few days, I was ready to walk out after just seven minutes into class.   I was so exhausted and couldn’t keep up, but I didn’t want to look like a quitter walking out in the middle of class.  After only, a couple of weeks, I was hooked.  Slowly, instead of wearing sweats to class, I felt confident enough to wear leggings.  The instructors told me that in a month I’d feel the difference; in three months I’d see the difference, and in six months EVERYONE would see the difference.  They were so right.

Now, I not only box but run and weight-lift.  I try to do something to benefit my body every day.  Working out makes me feel strong, empowered, clear-headed and… happy.  I pulled the scale out of the back of my closet, and now I like spending time in the mirror.

This morning, I didn’t eat the muffin and the mental debate of whether I should work out or not only lasted a couple of minutes before I put on my sneakers, grabbed my keys and gym bag and started running out the door.